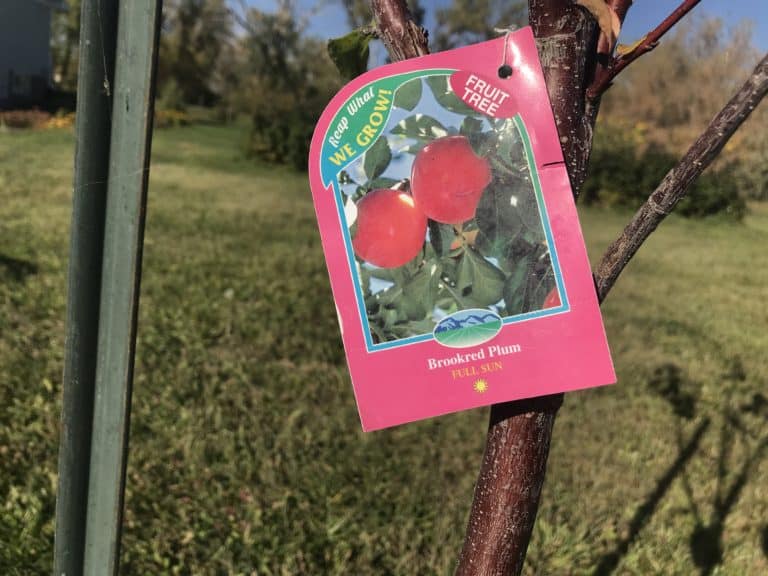 We planted eight fruit trees last year, but they’ve had a sad history which I will describe to you below. We’ll chat about what’s been going wrong for our trees, and how we hope to fix them. Hopefully learning from our mistakes will help you as you plan for planting your fruit trees!

These trees come from British Columbia, which was probably our first mistake. They were not acclimated to our harsh Southern Alberta weather. I would suggest trying to find locally grown trees that are used to your climate.

We hope to add a couple of pear trees and an Evans sour cherry tree in the future!

Why didn’t my fruit trees grow well the first year?

While I think it’s neat to have wildlife in the yard, I have a hate-hate relationship with deer. They eat all of my precious things! Deer fencing isn’t in the budget right now. Deer spray works- I buy the Bobbex brand- but my issue is that I forget to apply it!

The deer don’t stay in town here year round, but by late summer they start visiting, looking for food. Throughout the winter and early spring they’re around, but once food starts growing in the coulees, there outta here for the summer.

So anyway, all that to say, they come back when I’ve kind of forgotten they exist and am totally not expecting it. So I haven’t sprayed, and so they eat my trees pronto. This infuriates me and I immediately go out and spray, but after the next rainfall I forget again…and again the deer do some nibbling.

These trees have been well and truly nibbled, not once, not twice, but at least three times and probably more! The upper leaves and branches are intact as the deer can’t quite reach that high, but the damage below is severe.

Spring seemed to come early this year. It was beautiful weather for weeks when suddenly, a cold front hit. Deep freezing temperatures for a solid week (in April, I think??) caused great distress to all the fruit trees in the area. Nary an apple to be found, this year!

We actually thought our Mount Royal Plum was dead, but throughout the summer it did grow a few leaves. We’ll leave it be for now and see how it looks next year!

Then, in July, everything was pummelled by hail. Many branches were broken and damaged on the fruit trees, poor things. I trimmed those off carefully with clean clippers.

The soil was so incredibly hard where we planted these trees, that we basically had to use every muscle to chip away at it and make a hole big enough to plant the trees in. We had no machines at our disposal, and figured these were small enough trees to dig the holes by hand. To be honest, we probably didn’t actually make the holes big enough because the soil was so hard.

We mixed some good soil in with the regular soil and added some fish fertilizer to some trees and some Myke Tree and Shrub Mycorrhizae to others (whatever we had left of both. The trees came unexpectedly and we weren’t really ready for them). At the time, we really didn’t expect them to survive at all…

Grass around base of trees

Grass growing immediately around the tree trunk is not ideal, since grasses are highly competitive and will deprive the trees of the water and nutrients they need to thrive. Not to mention, weed whipping next to fruit trees may irreparably damage their trunks.

What else we did wrong with planting fruit trees

We didn’t plan ahead

We didn’t plan ahead for getting these trees. Someone we knew had ordered extra trees, so we got an unexpected offer of good priced trees without any advance notice. We took the deal but would have been wiser to wait until we were ready. Who can turn a good deal down, though?

Planted at the wrong time of year

Also, it was in mid-August that we got the trees. Not the ideal time of year to plant trees! Ideally, you would plant trees in spring or fall, not in the heat of summer.

No soil amendments to speak of

We didn’t have any compost but really only some garden soil to mix into the planting holes (plus a bit of Myke and fish emulsion- whatever we had on hand). There are mixed messages about whether or not adding compost to planting holes for trees is a good idea or not. Naysayers claim that tree roots will be more happy staying in the loose compost zone instead of branching out into the native soil. That could be true but I really don’t know.

We didn’t test the soil

Plans for next year

So many plans and dreams for next year! But hopefully we can get around to at least a few, especially mulching with wood chips around the base of each tree.

Probably we will put compost down first, then mulch. (Maybe some cardboard as a weed/grass barrier!) As the mulch decomposes, the soil will become more fungi heavy than bacteria heavy, which is ideal for tree growth.

My end goal, though, is to turn this area into a sort of food forest with different canopy layers, fruiting shrubs, fruit-producing ground covers. Realistically, I don’t think that’s going to happen next year, but I do think sooner is better than later!

Should You Plant Blackeyed Susan? (it will take over your garden)