Starting a Garden From Scratch? 3 Things You Should Know 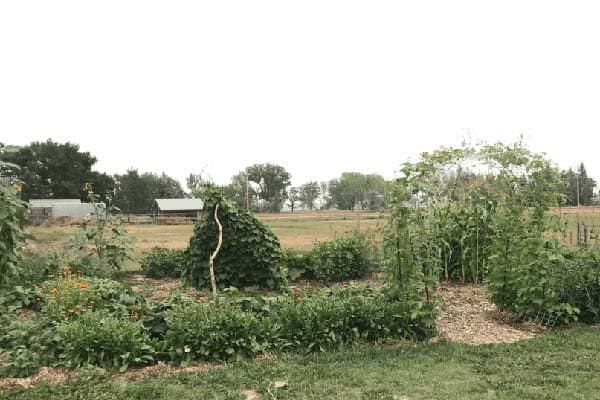 My garden went from plain ol’ overgrazed horse pasture to this in less than a year:

This is how it happened!

(Disclaimer: I’m not saying this is the right way or the best way. It’s just the way things happened for me and appear to have worked out just fine).

The area where our garden was going to be located was already mowed so we did nothing here. Potentially we could have mowed shorter, but our mower is set at its highest setting and it’s still pretty short, unfortunately.

Ideally, you would smother the area with either several overlapping layers of cardboard or even just a big sheet of plastic. However, in my case I didn’t have time to leave a smothering layer for a season, plus the budget was tight.

What we ended up doing was tilling the area only once. We hired a family member to come with his garden tractor with a pull behind tiller, since that was the best option available to us.

I suppose you could use a sod lifter and go from there, but the one thing that might make tilling in this case a better option is that all the grass remains and roots and everything stay in the soil.

In turn, this will help the soil start rebuilding from the travesty that tillage is, by decomposing and feeding microorganisms in the soil. It will also add organic matter for water retention and other purposes.

(Note: some people would choose to spray, which would likely be the easiest method, but is non-negotiable for me. Especially not where I will be growing veggies to feed my family!)

To the freshly tilled garden (which smelled absolutely fabulous, by the way! Who knew earth could smell so good??) I added several bags of leaves, after which the wind promptly started blowing the leaves all over the neighbor’s pasture.

Quickly, I dragged out some hoses and started up a sprinkler, hoping the moisture would hold them down a bit. While that was going, I started throwing shovelfuls of dirt on top of the leaves. It must have been a ridiculous sight! Also some good exercise for me!

It’s also a great idea to use fish emulsion or well composted manure. Or snag a few dried up clumps of horse manure at your fence line, which is what I did! Haha, don’t tell my neighbor. I don’t recommend that though; ideally manure should be well composted before use on your garden.

Things I would do differently

Next time, I would really make sure that no weeds remained before planting my garden crops. I definitely struggled with dandelions this year…although they were mostly in the paths. I should have followed my own advice about paths.;)

If I had more time, I would likely plant some cover crops and just get the soil in really good shape before planting my garden. Ideally, I would also invest in some good compost or soil to spread on top.

As you see, even if the process isn’t followed by the book, you can still end up with a beautiful, lush, productive garden! The main thing is to just go out and do it! Get gardening. Your health, both physical and mental, is sure to improve!

Looking to Attract More Birds and Bees to Your Yard? 10 Tips

10 Tips to Manage Water in Your Yard