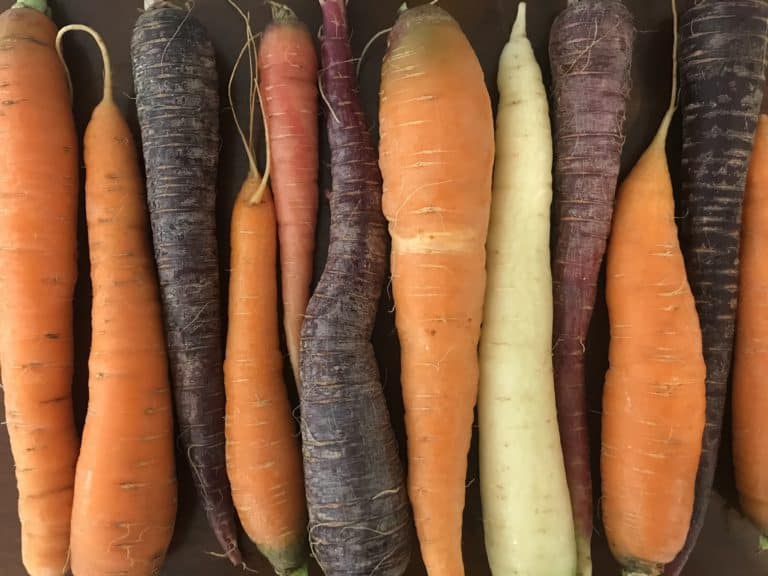 Garden harvest season is nearly over, and I haven’t posted any updates until now! In addition to what I’ve grown in my own garden, I also sourced some produce elsewhere and did some food preservation! I canned pickles, salsa, and pasta sauce, and froze beans and applesauce.

It’s been a busy summer! But finally, here’s an updated tour around my garden.

Well…in July it appeared that my sunflowers were destroyed by the hail. But here they are in mid September! Maybe the hail did me a favor and made each plant grow a lot more flowers? Hmm…

I didn’t plant any of these, but they were volunteers after last year. Same goes for the marigolds underneath.

More calendula throughout my garden than I know what to do with! They all reseeded themselves last year; I didn’t plant any more seeds this year! Last year I dried many petals for my sister to use in making lotions and potions.

I’m so happy with these carrots! This is the best success we’ve ever had with homegrown carrots. With such great no-till soil, my five year old and I harvested them easily by just pulling them up by the green tops.

These grew from the “Rainbow Blend” carrot seeds we bought from West Coast Seeds. There may be a few other carrots mixed in as well; I think I also planted some nantes carrots seeds that I already had.

Our corn never did recover from the hailstorm and did very poorly. There are cobs on the stalks but I don’t think any will grow to full size or ripen before the first frost.

Check out the Scarlet Runner Beans on the makeshift rebar trellis behind the corn! That might actually been part of the problem with the corn that I didn’t think through. Maybe the beans blocked too much sunlight for the corn?

Notice how smoky the sky is on this photo! We’re having a lot of wildfire smoke around here lately…

Lots of tomatoes growing on the plants, but again, they were really set back by the storm and I don’t think any will nearly be ripe before the first frost. Maybe it’s time to try some green tomato recipes? I’ve seen some for green tomato salsa that sound interesting!

I’ve harvested lots of lettuces, spinach, and green onions this summer. And swiss chard! I don’t know what to do with so much swiss chard, actually. Anyone have recipes to share??

Plenty of potatoes! Both white and red fingerling; I’m unsure of exact varieties. Definitely a better outcome than I expected, after the plants were so hail damaged. I’m trying to cure these potatoes for (short term) storage, so here I’ve placed them in a flat cardboard box and covered them with brown paper.

We’ve harvested a few handfuls of green beans here and there, enough for a few meals but that’s pretty much it!

And raspberries! Pictured are a fall fruiting variety (I don’t know which variety, as these were gifted to me by my neighbor).

I also have a row of summer-fruiting raspberry bushes (also gifted by my neighbor!), and while they didn’t produce a huge abundance of fruit, for many weeks my kids and I would snack on them as we picked them. Just today I still found about five ripe raspberries on this row, and they were delicious! They’re definitely later than usual this year.

So that’s it in a nutshell! All in all, this garden turned out better than expected with the rough start. And the soil! It’s loose and fluffy with great structure. I spotted many worms as we dug potatoes and carrots! Last year I don’t think I saw a single one.

I didn’t use compost or any other soil amendment this year, with no ill effects that I can see! What I have done, as I always do, is chop and drop. For example, all the potato plants were just laid on top of the soil to slowly break down and create a “mulch” layer as well.

Shortly I will chop and drop any remaining plants, but leave the roots intact in the soil and some stems above, not only to increase soil humus as they break down but also to lessen the possibility of wind erosion over the winter.

I’m grateful for a rest season from vegetable gardening…and I hope to soon start planning for next year’s garden!

What to Plant to Attract Insects in Autumn in Southern Alberta