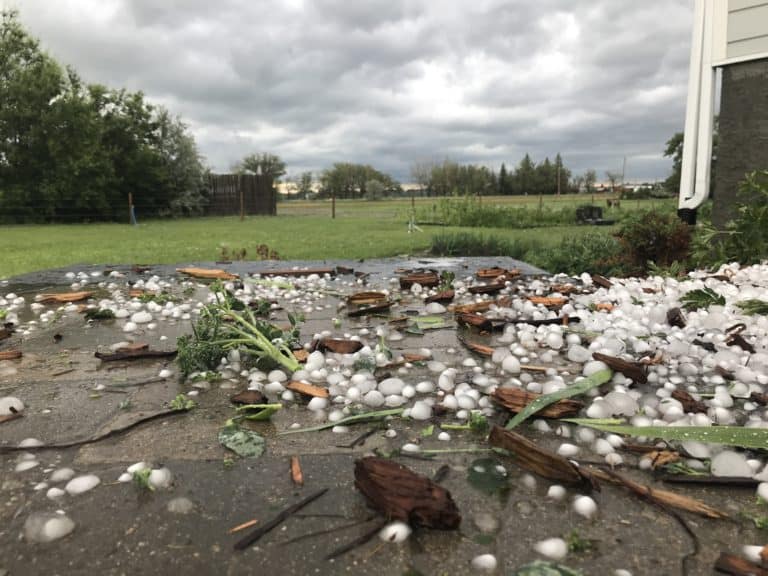 Yesterday was a sad day.

We woke up to thunder rumbling in the distance. It is rather unusual to have a thunderstorm THAT early in the day, so we commented about that.

Then there was an initial brief storm an hour or two later, with hail which didn’t seem to cause much, if any, damage.

I snapped the above photo immediately before the second storm hit. I was so excited to find several stunning purple prairie clover blooms in my swale! Then I ran to the house because it was looking pretty ominous, and we briefly sat outside on the covered deck.

We heard some eerie cracking sounds in the distance, and then a whistle and what sounded like a gunshot as the first hailstone hit the deck. After that there was a roaring sound as the hail started coming down with a vengeance. At that point we went inside because it felt pretty dangerous, what with all the bouncing hail!

I felt helpless and a little distressed as we watched the hail pounding down. Many of the leaves were torn off the trees and I could only imagine how my little plugs were faring.

Afterwards, we went out to survey the damage.

After the first storm, we had gone out to check on everything. Everything looked pretty much unscathed, and we commented on the beauty of all the fireweed flowers and the lushness of the garden.

Had I realized there would be a much more devastating storm coming along shortly, I may have cut a bunch of flowers to take indoors!

Once the hail melted, there were actually some tiny liatris plants here that were still ok. They’re pretty limp and ragged right now, but hopefully they’ll make a full recovery!

The blackeyed susans actually don’t look that bad! They had some protection from the house, which blocked some of the driving hail to this area.

The harebells were blown flat, but I think they might perk back up! Some larger liatris that I had before this year are looking fairly sturdy still too.

My veggie garden had been looking beautifully lush and healthy, but now it’s just full of broken stems and damaged stalks with some leaves still attached, like the above sunflowers. There are few whose heads aren’t cracked.

The potatoes fared similarly while the tomatoes are absolutely smashed to pieces. My red beets are very damaged but I’m going to leave them for a day or two and see if some remaining (holey) leaves will be enough for them to survive and keep growing. Otherwise I’ll harvest them although they are rather tiny still.

The borage is flat on the ground; raspberry bushes look bedraggled but may recover. Between storms, hubby and I had each picked a ripe berry and eaten it!

My rhubarb plant was also quite damaged. I harvested almost all of the stalks and cut off the damaged parts. After chopping up any good parts, I had one large freezer bag full of chopped rhubarb.

Our once immaculate pool filled with twigs and leaves and other debris.

This is what our gravel driveway looked like! Absolutely covered in leaves and branches.

There were a few dead birds lying around. And our free range chickens hadn’t had time to get back in their coops but managed to find cover under the trees. They appeared frightened but otherwise unscathed, and later had a snack of one of the dead birds (did you know that chickens are omnivores?).

Our downspouts are totally dented, as are our gutters. There are a lot of shingle ‘crumbs’ on our decks.

It’s so discouraging sometimes, to be a gardener! But we can still find beauty in and thankfulness for a lot of things during a time like this…

…such as this large bowl of potatoes the kids and I just dug from our destroyed garden! Looking forward to fresh potatoes for dinner tonight!